In 2018, Aaron Nola was one of the top pitchers in baseball. He posted a 17-6 record with a 2.37 era. Nola was voted to his first All-Star game and finished 3rd in the NL Cy Young voting for a Phillies team that put together their first 80 win season since 2012. The Phils would add catcher JT Realmuto and Bryce Harper in the offseason. With the team starting to trend upward, expectations grew for the young right-hander to take the next step towards becoming an ace for the Phillies rotation. Unfortunately, this wasn’t the case. Nola took a step back in 2019 posting a modest 12-7 record that featured a 3.87 ERA; the second-highest mark of his career thus far. So what went wrong for the 26-year-old? Let’s dive in.

In 2018, Nola was elite at generating poor contact from opposing batters. When comparing all pitchers who saw at least 450 batted ball events, Nola was tied for the 6th lowest average exit velocity in baseball, as well as 20th in balls hit with an exit velocity of 95 mph or more per baseball savant. Nola also finished in the upper echelon of pitchers when measuring wOBA, xWOBA, and xwOBAcon against which all look at the quality of contact being made against the pitcher.

Nola relies on a four-pitch mix of a four-seam fastball, change up, curveball, and sinker. His curve was very effective in 2018 generating 108 of his 224 strikeouts for the year. Hitters looked foolish at the dish when the curve came in, whiffing at 41.1% of swings. If they managed to make contact, it wasn’t very good, as opposing bats mustered a measly .155 batting average and .183 wOBA against Nola’s curve.

Soft contact is Nola’s game, he doesn’t get shelled very often. Nola generated ground balls on 52% of balls put in play; he also was very good at keeping the ball in the yard as well as his 10.6% HR/Fly Ball rate and his 0.72 HR/9 were well above the league average. Combine these metrics with Nola only walking 58 batters all season, he made a case to be considered one of the top pitchers in baseball in 2018.

Nola got off to a slow start in 2019 allowing 20 earned runs across his first six starts. He was fortunate to be 6-0 but held an ERA in the high threes. Not quite the production they were expecting from the now 26-year-old.

Control was an issue for Nola this past year. He walked 22 more batters than he did the prior season in fewer innings pitched. He saw only 46.2% of his pitches fall into the strike zone, down from 51.7% in 2018. He also saw an uptick in the percentage of zone pitches that batters made contact with jumping from 78.6% to 83.6%. Imagine a pitcher throwing 100 pitches in the strike zone and having the batter make contact with 84 of them. Not a good look. Nola saw the number of ground balls he induced to be slightly lower but a big issue was the 6.8% increase in his HR/FB rate up to 17.4% which was the 10th highest in baseball among qualified pitchers.

When examining his mix of pitches in 2019, we see an increase in velocity. It can also be seen that Nola relied heavily on his curveball and less on his changeup and sinker. Perhaps these are related to one another. In 2018, Nola’s sinker was very effective generating a .182 batting average on 76 batted ball events. Opposing bats hit .294 with a .412 slugging % off of Nola’s sinker on 1 less batted ball event. When a given pitch just isn’t working, pitchers will have to rely on other pitches more, which could explain the increased amount of curveballs thrown by Nola. The curveball was still Nola’s best pitch overall but in comparison to the 2018 season, it was much worse. Surrendering 22 more hits and six more extra-base hits it put about 50 points onto the batting average. To top it off 6% fewer batters were swinging and missing. I had to find out why. Below is a movement chart of Aaron Nola’s pitches in terms of inches. 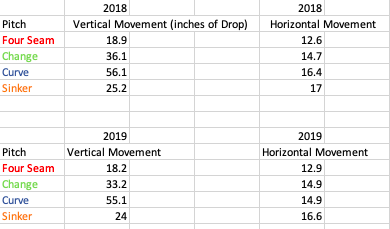 As you can see, all of Nola’s pitches saw a less vertical drop in 2019 and two of his pitches moved less horizontally across the strike zone. Those two pitches are the curveball and the sinker. This means his curveball and sinker would on average, hang up a little higher in the zone while the curve would break about 2 inches less than it did a year prior. When pitches hang in the zone, they become much easier to square up and hit. The decrease in movement may be responsible for the increase in Nola’s velocity. However, those couple inches that were lost in 2019 played a huge factor in what was supposed to be a breakout campaign for Nola. While the current layoff from baseball is not what anyone had hoped for, Nola has plenty of time to review a lot of tape from last season and work on his craft so he can come back to his 2018 form when the season starts.