This article is by former Dingerball author Carmen Ciardiello

Baseball players, specifically hitters, can add value in many different ways. They can add value by hitting home runs, getting on base, running the bases effectively, making a few spectacular plays on the field, or making the easy plays in high volume. To the average baseball viewer, these are pretty obvious value-add actions. Any person who watches his or her favorite team a handful of times a season can often point out the players who add value in these ways because these acts directly lead to runs on the scoreboard or runs saved. But players can consistently add value in a less obvious manner, one which is not easily translatable to runs and one which is not obvious to the naked eye: leveraging the count.

We can place a run value on each of the 12 possible counts a hitter can face in a plate appearance. The concept of run expectancy tables was first developed to describe the 24 base-out states. But we can take it one step further and include the count: this yields 288 possible count and base out states. For a primer on run expectancy, I recommend this link from the FanGraphs library.

Each combination of count, base, and out states has a run expectancy associated with it. I used the data from the 2019 season to calculate the run expectancy of each case. To isolate the effects of the changes in the count, I took all the pitches from the 2019 MLB season. I did not include pitches the ended a plate appearance. I did this to strip away the effects of plate appearance outcomes when determining the value of a certain count from the batter’s perspective. I then averaged out the run values over each base out state for each count, controlling for the base and out state and only considering the effect of the count. The following table represents the run values, again, controlling for the base out state: 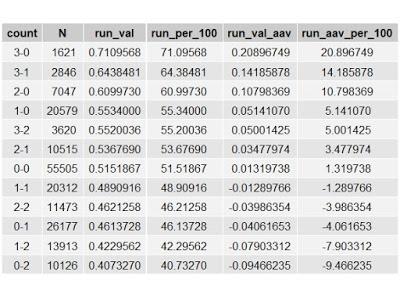 The first column is the count. N represents the number of times that count appeared. Unsurprisingly a 0-0 count was the most frequent. The third column represents the average run value over all base out states and the fourth is the run value prorated over 100 pitches. For example, over 100 pitches , a 3-0 count provides about 30.36 runs worth of value. Next, I took a weighted average of all the run values for each of the 12 possible counts (weighted by the frequency N) and used that as the baseline for the average run value of a count. I then calculated the run value about average for each count in the fifth column and the sixth column is that number prorated over 100 pitches. So a 3-0 count, over 100 pitches in a 3-0 count, is worth about 20.90 runs over 100 “average” pitches. 100 pitches of an 0-2 count is worth about -9.47 runs below 100 “average” pitches. Unsurprisingly, counts with little strikes relative to balls are more valuable, from the perspective of the batter. So hitters who can work the count in such a way where they find themselves in these advantageous counts can add value to their clubs without even putting the ball in play.

Trout over the course of the 2019 season added about 7.06 runs from putting himself in advantageous counts. Baez, on the other hand, lost about 12.67 runs from his lack of plate discipline. That is a difference of about 19.72 runs over the course of a season or 0.65 runs per 100 pitches. Considering a win is worth approximately 10 runs, Trout without putting the ball in play is providing about two more wins worth of value compared to Baez. That is not to say Baez is not a bad hitter. In 2019 he posted a 114 wRC+ per FanGraphs, which corresponds to a park-adjusted line of 14% better than the league average hitter. When accounting for his base-running and excellent fielding, Baez was worth 4.4 fWAR in 2019. Baez is a great player and a good hitter despite his ridiculous swing-profile. So how can he be effective at the plate despite often finding himself in pitcher-friendly counts? He posted a 0.468 wOBA on contact, tenth highest for qualified hitters.

So what can we say about Baez overall? He has turned himself into a good hitter despite his swing profile. His results are a product of being a monster when he makes contact with the baseball. It is easy to say he can ever better if he becomes more selective and tampers down his tendency to swing at pitches outside of the strike zone. The issue is trying to figure out how much of his fantastic results on contact are a product of being so aggressive at the plate. Last summer, Ben Clemens examined Baez at FanGraphs and came to the conclusion that Baez’s frustrating lack of discipline fueled his overall results. I agree with this assessment, to a degree. I think there is room for Baez to improve his discipline, even at the expense of some value on contact, to the extent he can at age 27. If he does continue to mash on contact, however, he will always be effective.

Trout, on the other hand, combined his selectivity at the plate with a 0.503 wOBA on contact to the tune of a 180 wRC+, a park-adjusted line 80% better than league average. Trout’s combination of discipline and prowess on contact is unrivaled in the sport today. Marte took his approximately league-average swing profile and combined it with elite production on contact (0.444 wOBA) to generate a park-adjusted line 50% better than league average.

What have we learned? I would not say anything we did not know before; getting into hitter-friendly counts is good while the opposite is bad. What we did do is backed up the claim with evidence. What we also know is that poor plate discipline is not a death sentence for a hitter. Productivity is a combination of value with and without contact. Using Baez and Trout as the extreme examples, we know that hitters can have varying degrees of success despite drastic differences in their profiles. All that matters is how they add value in one aspect of hitting (plate discipline) in concert with the other (success on contact).