If I asked you which MLB player most resembles Aaron Judge, who would you consider? Well, I can almost guarantee that the right answer (According to Baseball Savant’s affinity metric) did not cross your mind. That is, Jason Castro. While Judge has four inches and over 65 pounds on Castro, the two’s batted ball profiles were very similar in 2019.

The biggest component was strikeouts. In 2019, among bats with 250 plate appearances, Judge and Castro sat side by side in strikeout rate, 18th and 19th respectively. Castro’s 32% strikeout rate, just a half a percent more than Judge’s, places him in great (tall) company. That is if we ignore what all those strikeouts mean, of course. Even beyond strikeouts, meaningful and merited similarities (which we’ll soon get to), there are a few stipulations.

First, Judge is still a very unique player. Again, using Baseball Savant’s player affinity, Castro’s affinity number relative to Judge is 0.76 (1.0 being the ceiling). Many players whose profiles are among the elite will possess a low-affinity with even their best comparison. For example, Mike Trout’s affinity to Yordon Alvarez is 0.63. The game’s best aren’t ever going to share much, even with each other. But Judge’s relationship to Castro is especially unique.

That’s because most superstars are like most other superstars – they’re good at baseball. I’ve already mentioned Trout and Alvarez, but the same rings true for Nelson Cruz and Jorge Soler (0.72), Pete Alonso and Ronald Acuna Jr. (0.86) as well as Christian Yelich and George Springer (0.81). Just look at the players Jorge Soler is most like:

There’s a ton of star power there. And then there’s Jason Castro. Just sitting there. That group of players have collectively hit 1,030 home runs in 63 seasons (including 2020, as of August 8th). That’s an average of 16.3 home runs per season. Castro has hit an average of 8.7 home runs per season, worst in the group. Half of that list has hit fewer than Jason’s 87 career home runs, however, each of them will almost certainly surpass him within a few years.

So beyond his strikeout rate, how did Castro end up being so similar to some of the game’s greatest? Take a look at their exit velocities and launch angles: They aren’t exactly the same, in fact, they differ quite a bit.

However, Savant’s affinity statistic uses specific classes of batted balls. That means we need to compare what those exit velocities and launch angles mean. And it turns out, both are fairly productive. When batters across Major League Baseball match Aaron Judge’s average exit velocity and launch angle, they bat .920. Casto’s mark produces an even better .934. 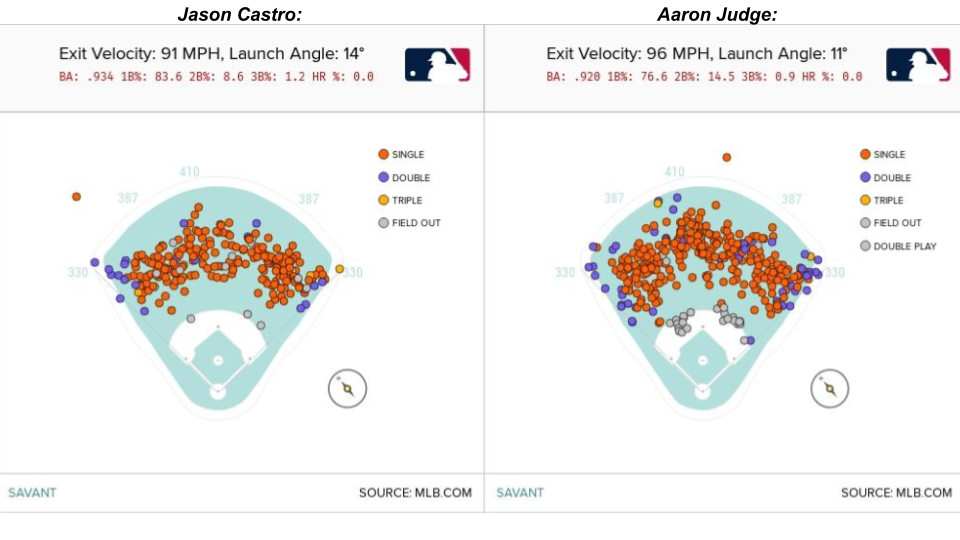 First of all, this is a terrible approach. Those averages don’t really represent what Castro and Judge actually did, but rather a single point intended to reflect all their batted balls. So neither can be expected to achieve those results, obviously. Next, note how the plot representing Judge’s average batted ball is much deeper into the outfield and more frequently yields extra bases. This shouldn’t surprise anyone. A ball hit harder and at a lower angle should go farther – and that how Judge is able to generate more value.

What’s really important is the similarity between the two trajectories’ batting averages. A .014 point gap may not seem like much and that’s because it’s not. Consider what happens when you couple Judge’s exit velocity with Castro’s launch angle or vice versa:

Not only are these numbers distant from the batting averages produced by the actual average batted balls of each player, but their difference, 0.031 points, is double that of the previous gap. So all in all, a very similar average batted ball. In fact, recalling their similar batting averages and distinct slugging percentages you wouldn’t be surprised to find that Aaron Judge hit just 0.8% more singles than Castro (12.0%).

Now that we know their average batted ball produces hits at a similar rate we can see what happens when we ignore the outcome of those batted balls – the real guts behind player affinity. And this is where some of the idiosyncrasies that make Aaron Judge one of the game’s best and Jason Castro little more than a footnote become clear.

Ultimately, again, affinity is based on classes of batted balls, not results. Correlated batted balls should show correlated results, but there’s lots of opportunity for noise there. That’s why Jason Castro and Aaron Judge are no more than 3.5 percentages points away from each other in all batted ball categories but two:

None of those numbers are very far apart. Especially considering the players they’re attached to.  Jason Castro’s propensity to get under the ball (or Aaron Judge’s lack thereof) and Judge’s propensity for solid contact is what separates them. But beyond that, the two aren’t especially dissimilar.

Knowing this, is there any hidden value in Jason Castro’s profile? Well before 2019, no. However last year, in his last season of three with Minnesota, the backstop achieved career highs in launch angle and exit velocity. Even previous highs hadn’t been coordinated. For Castro, this led to a productive season. His performance was one of his better campaigns across his career. Furthermore, he underperformed each of his expected stats.

Again, Jason Castro still isn’t Aaron Judge, but he’s shown he can be a lot closer than we may think. Especially after the start he’s off to this year. He, like everybody else, has only played seven games, but he’s picked up where he left off last year and then some. In fact, Castro’s batted ball profile has been even better this year, he’s just not seeing the results yet. With even more launch angle (20 degrees) Castro has produced a .304 expected batting average, .725 expected slugging percentage and .458 expected wOBA. All while his realized stats remain nearly identical to what they were last year.

Jason Castro isn’t about to break onto the scene as Aaron Judge Jr. but he may, be it this year or later, prove to be worth a little more than the grizzled veteran catcher we think of him as. And for a team like the Angels, who hope to at least flirt with Postseason glory, some production at the bottom of the lineup is far from insignificant.

All data sourced from fangraphs.com and baseballsavant.mlb.com.